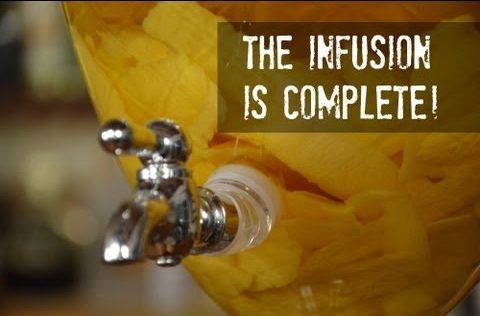 So I decided to try infusing some vodka over the weekend. I know all about flavored vodkas, but if I bought a bottle of flavored vodka it would probably just sit around for a long time before it got used. So I bought myself a one of the larger Absolut bottles (1 liter and change) so I could make small batches of different infusions.

I have a couple ideas I want to try out such as a chocolate and mint infusion but I have to find a place in the city that sells processed cocoa beans first. I suppose I could try it with some large chunks of bittersweet chocolate but I’m not sure what kind of texture will result with it being dissolved in the vodka. I also want to try something with kiwi fruit and cranberries but I am waiting for them to be in season.

I played it safe with my first attempt, apple and cinnamon. I had some sticks of cinnamon and some fresh, tart and crisp apples around. I didn’t have an infusion jar around so I opted for an empty jam jar with a metal lid. I cored and quartered one apple and added a single cinnamon stick into the jar and topped it with the vodka. I left it overnight and went to look at it the next morning. The color was now reddish, part of it was from the cinnamon and part of it might have been from the skin of the apples as well. looking at the apple quarters, it appeared that the apple lost some of its color outward from the skin where it was cut. Opening the jar up it definitely smelled strongly of cinnamon with a hint of apple. I removed the cinnamon because I thought that if I let it sit for a couple of more days, it would become too overpowering and be like drinking Goldschlager.

I just looked at it again and the color loss is even more pronounced than it was this morning. It definitely smells more apple-y now so I think my decision to remove the cinnamon sticks was a good one. I plan on letting it sit for a another day before I decide to taste it. I will let you know what I think in an upcoming post.