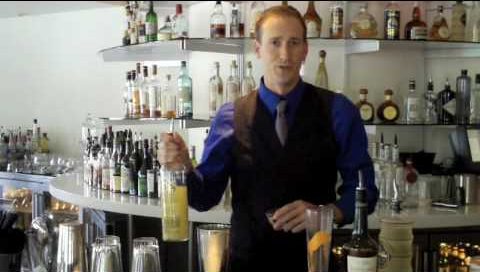 I was playing around with vodka infusions this week. The infusion I tried was with just vodka and peaches. After 5 days of occasional gentle swirling I sampled it. The fruit flavor was much more subtle than my previous apple and cinnamon infusion and it had a nice golden orange color to it.

I wanted to mix it into a cocktail but looked at all the various juices I had kicking around in the fridge. Nothing really appealed to me until I remembered that I had some blackcurrant cordial sitting in my cupboard. Normally I am very particular with my measurements but for some reason I was feeling adventurous because I was trying something new. I just randomly splashed various amounts of my vodka infusion and cordial into a glass, topped it off with soda water and hoped for the best. I took a sip and was pleasantly surprised. The second drink I made I made sure to take down more exact measurements.

I have no idea if any other drink uses these ingredients exclusively. A quick search on the Internet didn’t reveal anything so I decided to call my creation a Black Peach.

In a highball glass, filled partly with ice, add the ingredients and top off the glass with the club soda. Gently stir the drink to create an even color. Garnish with a peach slice if they are in season.

if anyone knows that this drink goes by another name, please let me know.